on July 03, 2016
This commission was to paint an aircraft that does not get much attention, the Avro Lincoln B2. This was the next step for the Lancaster bomber, and served with the RAF post WW2.

The client did ask for just the aircraft to be painted directly on to the canvas. However, due to the colour scheme of the aircraft, it would have bene lost on a black background. The client then suggested doing the RAF roundel as a back ground, but in a toned down version. 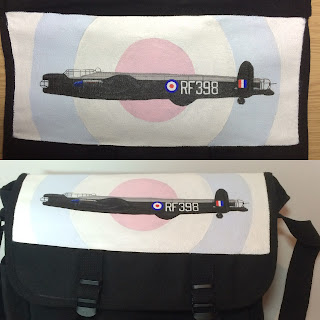 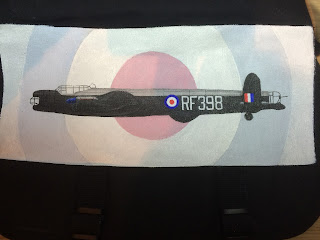 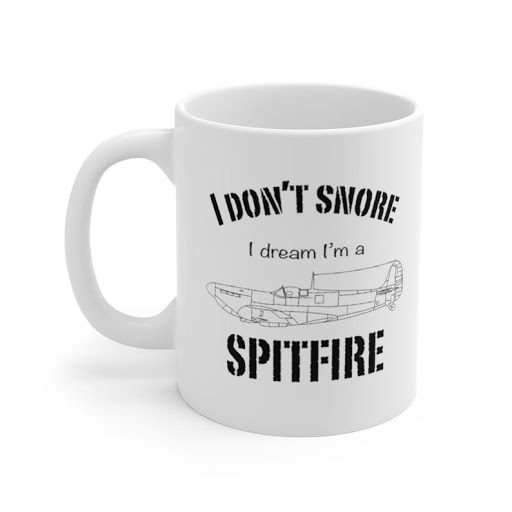 New 11oz Coffee Mugs Who doesn't enjoy a nice mug of coffee or tea, well OK not everyone does, but most people enjoy a hot drink of some sort. So with this in mind, I have started adding a selection of aviation and military themed 11oz coffee mugs to my Etsy shop. The designs are my own ideas or based on military insignia. These mugs are printed and dispatched in the UK by a company based in Westbury, Wiltshire.  So what mugs do I currently have in my Etsy shop? I don't snore I dream I'm a Spitfire Well the t-shirt has been quite popular, so seemed quite logical to add it to a coffee mug. To view it in my Etsy shop click here. 7th Armoured Div - 'Desert Rats' Another popular design, this time the famous Desert Rats insignia from the Second World War. I made it look distressed to give it some character. To view this in my Etsy shop click here . English Electric Lightning Based on a painting that I did of the famous British English Electric Lightning, makes for a very 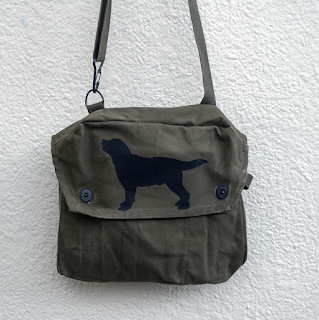 Are you a dog owner, especially a Labrador dog owner, then this bag is perfect for you. if you like going for long walks with your dog, and you need a hard wearing bag to take with you, then this ex-army (Finland) surplus bag, which I have washed and then painted a silhouette of a Labrador is ideal. As the bag is ex-surplus it has signs of being used, and some areas of repair. However the bags are very sturdy and have lots of character. The bag has the expected shoulder sling, plus a waist belt. This allows the bag to be secured around your waist, great for security in crowd situations. The waist sling, can be tucked in the bag if you don't need to use it. Front flap is secure by 2 press stud type fittings and the bag feels sturdy and robust. This handy bag, which features 1 internal compartment with a elastic strap to secure a drinks bottle and 3 internal pockets. Bag dimensions are 31x23x10cm. To view more bags like this, pop over to my Etsy Shop ' The Bear Cave  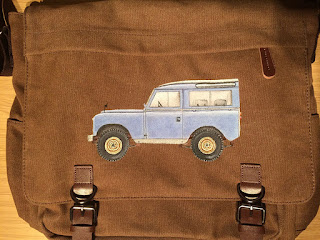 Really pleased with how this one came out. I was commissioned by a client in the USA (via Etsy), to paint her husbands Series 2 Land Rover on a messenger bag. The client wanted a bag that was not one of my usual range that I use. After some searching, and agreement with the client, we settled on the bag that you see in the photos (bag made by Aizbo). A very nice bag and very easy to paint on, some bags can be quite a pain to paint. Anyway, I think the photos show how well this came out. If you would like to contact me about a commission, then drop me an email . To view more bags like this, pop over to my Etsy Shop ' The Bear Cave '.